Arrested for being Black in a "City of Brotherly Love" Starbucks! 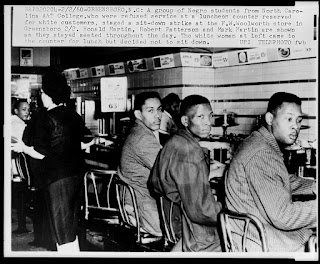 Clearly racism is on the rise in the era of Trump, and now it is starting to look like we are going to have fight even the lunch counter battles of the early 1960's all over again as two African American men are arrested in a Philadelphia Starbucks for trespassing. They were waiting quietly to meet a friend, who happened to be white. They were refused the use of the restroom because they hadn't ordered anything. No problem, they continued to wait. Starbucks ordered them to leave and when they refused, the Starbucks store manager called the police, who arrested them for trespassing just as their friend was arriving.

I suppose, if you want to use the restroom or wash your hands before you eat at a Starbucks, you had better place your order first, so that you can gain access to their restroom facilities, and then get your food and drink. I don't think Starbucks is really setup that way. I don't think you will have an issue if you are white. I'm not and I won't be using Starbucks for a long time.

I delivered The Philadelphia Inquirer as a boy growing up in the pre-Trump Atlantic City. It is reporting:

By Patricia Madej, Joseph N. DiStefano & Jacob Adelman
14 April 2018
Philadelphia’s mayor’s office and Police Department have begun separate investigations into the arrest of two African American men waiting to meet an acquaintance at a Center City Starbucks on Thursday after a video of the incident was widely shared on social media, triggering national outrage.

Mayor Kenney said in a statement Saturday afternoon that the city’s Commission on Human Relations has been asked to examine Starbucks’ policies and procedures, including whether its training includes safeguards against “implicit bias,” or unconscious stereotyping.

“We are reaching out to Starbucks to begin a discussion about this,” he said.

The video, which was posted by Philadelphia-based author Melissa DePino on Thursday, shows at least six Philadelphia police officers taking the two men into custody without resistance. By 5 p.m. Saturday, the video had gathered nearly 4.3 million views.

@Starbucks The police were called because these men hadn’t ordered anything. They were waiting for a friend to show up, who did as they were taken out in handcuffs for doing nothing. All the other white ppl are wondering why it’s never happened to us when we do the same thing. pic.twitter.com/0U4Pzs55Ci
— Melissa DePino (@missydepino) April 12, 2018

Two black men were arrested waiting at a Starbucks. Now the company, police are on the defensive.

Starbucks, which has touted its progressive values and its “social impact” agenda, faces fierce criticism and calls for a boycott after two black men were arrested at a Philadelphia store, sparking accusations of racial profiling over what the company’s chief executive called a “reprehensible” incident.

In a statement, CEO Kevin Johnson offered “our deepest apologies” to the two men on Saturday, who were taken out of the store in handcuffs by at least six officers. A store manager had asked the two men to leave after they asked to use the bathroom but had not made any purchases, police said. The men declined to leave and said they were waiting for a friend, their attorney later said. The manager then called 911 for assistance, the company said.

The confrontation was captured on a video viewed more than 8 million times on social media, fueling the backlash, which drew responses from Philadelphia’s mayor, the city’s police commissioner and now the chief executive of the biggest coffeehouse chain in the world. More...

From the New York Times we have:

By Matt Stevens
15 April 2018
Two black men walked into a Starbucks in downtown Philadelphia on Thursday afternoon and sat down. Officials said they had asked to use the restroom but because they had not bought anything, an employee refused the request. They were eventually asked to leave, and when they declined, an employee called the police.

Some of what happened next was recorded in a video that has been viewed more than eight million times on Twitter and was described by the chief executive of Starbucks as “very hard to watch.” Details of the episode, which the authorities provided on Saturday, ignited widespread criticism on social media, incited anger among public officials and prompted investigations.

The video shows the men surrounded by several police officers wearing bicycle helmets in the Center City Starbucks. When one officer asks another man whether he is “with these gentlemen,” the man said he was and called the episode ridiculous.

“What did they get called for?” asked the man, Andrew Yaffe, who is white, referring to the police. “Because there are two black guys sitting here meeting me?”

Moments later, officers escorted one of the black men out of the Starbucks in handcuffs. The other soon followed. More...

.@KillerMike addresses the incident in which two black men were arrested while waiting in a Starbucks. @JoyAnnReid asks, "Do you think that encouraging black people to carry endangers black people's lives?" #AMJoy pic.twitter.com/3OEQ3Dh06I
— AM Joy w/Joy Reid (@amjoyshow) April 15, 2018