40 years after 'Vietnam' napalm returns to human skin in Syria 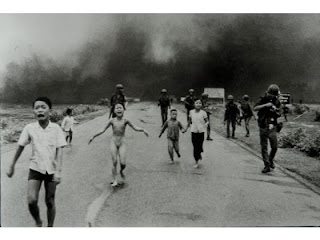 While we are distracted by our election year circus, the first holocaust of the 21st century is moving into high gear. Today we received this bulletin from Ward Alyafe [@ward_alyafe] at SyriaWatch: #Daraya 54 Explosive barrels, 20 of them with #Napalm, also 3 surface surface missiles by #Syrian regime

The Guardian is reporting:

A Syrian civil defence group has accused the government of President Bashar al-Assad of using napalm on a town near Damascus, the latest escalation in a conflict that has seen the use of chemical weapons and indiscriminate aerial bombing campaigns.

If true, the attack would be the second serious allegation of napalm use in the Syrian war. In 2012, a BBC crew in Aleppo province witnessed what they described as a “napalm-like” attack on a school.

The latest allegations come just over a week after the UN security council passed a resolution that would allow investigators to identify the perpetrators of chlorine attacks in the country, widely believed to be conducted by the Assad regime.

They also come almost exactly two years since the infamous sarin gas attack in the Damascus suburb of Ghouta that killed more than a thousand people and nearly triggered American air strikes against Assad’s forces. More...

More than 90 people were killed on Friday, while 83 had been recorded dead by Saturday night, with most of the deaths occuring in the Aleppo province.

"Even with the deadly standards of this war, these death tolls are staggering," Al Jazeera's Reza Sayah, reporting from Gaziantep on the Turkish side of the Syria-Turkey border, said.
Aleppo deaths

The UK-based Syrian Observatory for Human Rights (SOHR), which records daily developments in Syria, also released figures on Sunday detailing the killing of at least 327 civilians, including 76 children and 41 women, in Aleppo over the last 15 days.

More than 100 of the 327 were reportedly killed in shelling by government warplanes, while 126 were killed in attacks by opposition fighters on government-held areas in Aleppo.

In the suburbs of the city, another 94 were killed by Syrian regime bombardment, according to the SOHR.

Zouhir al-Shimale, a local journalist in Aleppo, said the attacks have not stopped since the rebels opened the Ramosa route two weeks ago.

"The shelling on the city has intensified. The regime has been attacking the city's main roads that people have been using to get around eastern Aleppo," Shimale told Al Jazeera on Sunday.

"Yesterday, the regime used cluster bombs, which they have been using extensively recently, to attack a bus station in al-Firdous neighbourhood, whereby more than 50 civilians, including women and children, were attempting to leave the city. Most of them were killed."
More...

Syria is the Paris Commune of the 21st Century!
Click here for a list of my other blogs on Syria
Posted by Linux Beach at 5:19 PM