Tweet
Jascent Jamal Lee Warren, 26, a homeless activist known as “Shakespeare” to his friends, lay dead and another black man injured, after a security guard for a Venice Beach hotel acted on orders from the hotel owner to "Kill that nigger" and started firing at a group of homeless people sleeping on the sidewalk early Sunday morning. While the man that did the shooting fled and is still at large, LAPD has announced that they have arrested another man associated with the murder, but have not said who he is. I have it on good information he it is Sris Sinnathamby, the owner of the Cadillac Hotel and the man witnesses say ordered this racist murder. The police are holding him on suspicion of murder for $1 million bond. That may sound like a lot but this man can easily afford it and the charge is murder.

Although the murder scene was crowned with satellite news trucks yesterday, the media has been very quiet on this story, mostly reporting it as a dispute among the homeless or another gang-related killing. Even where the real story has gotten out, they are trying to pull it back. For example, the CBS-LA News website originally ran the story with this headline:

and then changed it to this:

for the very same web link. They also changed the content somewhat adding "Authorities have not confirmed this witness report." of the racist order:


Reporting from the scene, CBS2’s Greg Mills said a witness told him the owner of the Cadillac Hotel was with the gunman before the shooting. The witness also said the hotel owner ordered the gunman to shoot the homeless people.

“He pulled out the gun and the guy that owns the Cadillac Hotel told him ‘Kill that n—-r’,” says Ras Whitelion.

Authorities have not confirmed this witness report.

But you can hear the witness for yourself @ 05:02 in the YouTube video below.

This is how this story happened for me. I had ended my shift as a Linux support engineer but was still at my work computer (in my Venice apartment) working on my long response to the Jacobin piece on Syria when I heard two volleys of shots ring out across the street. After the first volley of maybe 7 shots, I correctly made the assessment that what I was hearing actually was gunfire, but not close enough that I needed to take evasive action, and after the 2nd volley proved to be the last, I continued my writing and eventually went to bed. The story I pieced together after I got up later that morning is far more troubling than the media's first reports.


But before the story comes the context.

On background: Venice is undergoing a major crisis of gentrification, especially since Google moved across the other street from me and the area started calling itself "Silicon Beach." The only reason I remain one of the few housed black men in Venice is that I had the skills to join the "Silicon Beach" crowd.

Needless to say, this gentrification has been accompanied by a vicious campaign to force the homeless out of Venice. One of the areas of the greatest controversy has been Dudley Ave between Speedway and the Boardwalk, where the shooting took place. This was the historic site of the Venice West Cafe, and in my time it had the Dudley 7 Cinema, were a rough cut of Vietnam: American Holocaust was first shown, Sponto Gallery which featured a lot of local artists and events and Henry's Market, the local store for residents and the homeless alike, and on the other side of Dudley was always the Cadillac Hotel. Now all those other places are gone, replaced by upscale restaurants, but a remodeled Cadillac Hotel remains. Word on the street is that the owner of the Cadillac has been hot to run the homeless away from his place, but because of a few court decisions, the homeless have the right to sleep on the sidewalk between 9pm - 6am. The owner has been unhappy with LAPDs performance in removing the homeless so he hired the services of some Venice gang members to do "security," and they haved used violence and intimidation to run the homeless away. Eventually a deal was worked out, the homeless would not try to sleep in front of the Cadillac and another protected location, and they would be left alone. [ If you know the movie Emperor of the North Pole, think Shack's train #19.] But apparently not everyone got the message and at least one homeless artist just decided he wasn't going to continue to stay away. In any case, Saturday night there were about a dozen homeless people sleeping on the sidewalk in front of the Cadillac. 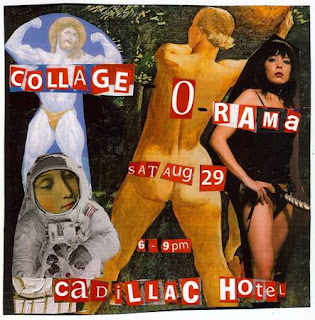 There also was a big party at the Cadillac Hotel Saturday night. It was the "Collage-O-Rama" Venice Art Show, with a lot of high brow West LA folks, as well as a number of local "haters,"  as some of us call them, with gang members doing security. Now, this is the story going around on the street, and there are suppose to be three witnesses to this. This was actually after the party. It was said that the owner, very high on cocaine and alcohol, and angry at the homeless sleeping on the sidewalk, told his bodyguard as they were standing together outside the hotel "Shoot that nigger" which the bodyguard proceeded to do, unloading his pistol at the sleeping homeless, reloading and firing again before fleeing in a black SUV with another man and two women. People were also saying that the police arrested the hotel owner but the media wouldn't report the arrest until much later and as this post is published, still haven't named the arrested murder suspect. Most local outlets are reporting the shooting as a dispute between homeless people. [One of which drove off in a black SUV???] 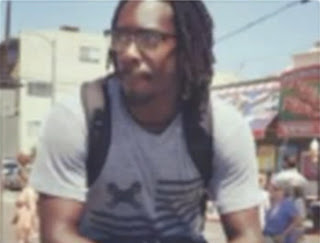 Yesterday I talked to the man that was shot and lived. He just got out of the hospital and is already back on the beach with nowhere to sleep. He was shot in the leg. He needs a wheel chair but all they gave him was a walker. He doesn't know anything about the owner's part in this. All he knows is that he was sleeping on the sidewalk about 2AM went he was awoken by a man waving a pistol and saying "You can't sleep here any more" and the next thing he knew, the man had open fired, reloaded and open fired again, spray bullets everywhere people were sleep. Sunday morning's toll of 1 dead and 1 injured was a lucky break. It could have easily been a mass shooting.

UPDATE: "Police have not released a motive."
I've just watched the 5:00PM CBS local tv news and that's what they said. They did say that the police had arrested the hotel owner for murder but they said he was the shooter and didn't mention a second man!! One has to wonder what they mean by "Police have not released a motive." Since, on their website, they have already quoted a witness saying the owner told the shooter "Kill the nigger." Are they waiting for instructions from the LAPD on how to report the story?

The alleged killer and hotel owner, Sris Sinnathamby, is a big contributor to Los Angeles City politicians. It will be interesting to see how this case is handled in that light.

A petition has been started to shutdown the Cadillac Hotel

Pictures from the Memorial | 2 September 2015 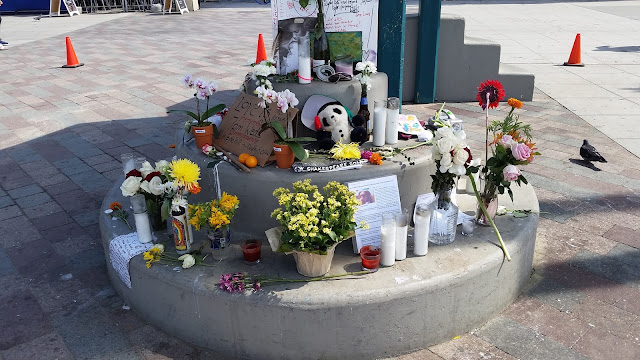 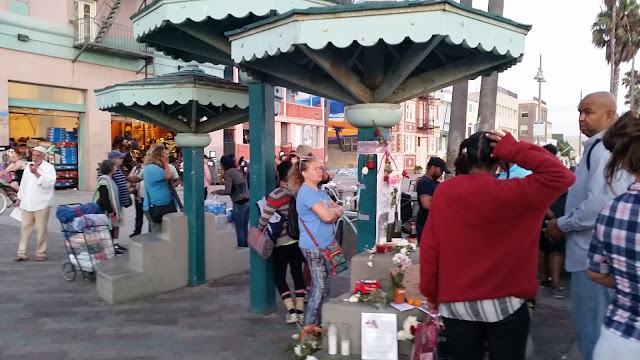 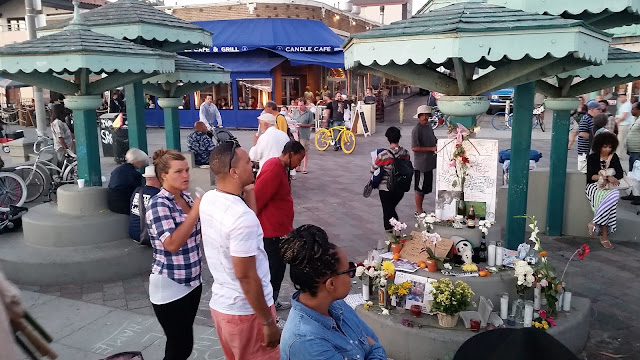 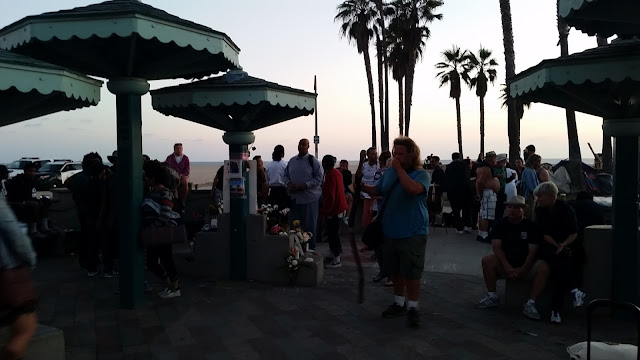 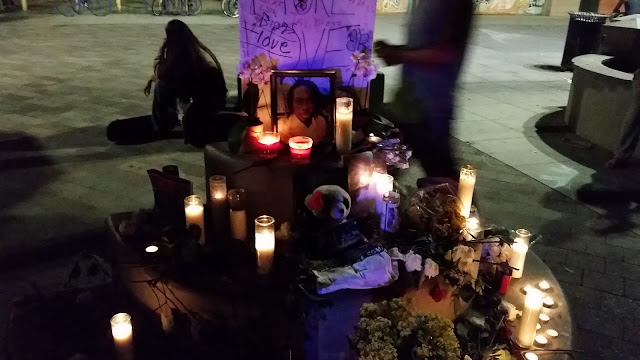 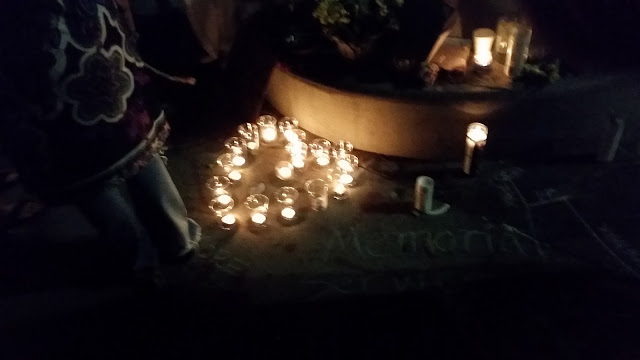