Israel massacres Gaza - "Like Shooting Fish in a Barrel"

Tweet
Israel is a European-American settler state in Palestine. The Bible stories of the Old Testament and the Torah gave it a mythological history. The holocaust of the Jews in Europe created the 20th century impetus. But it remains, at heart, what most such settler states are, a land grab aimed at taking a section of the Earth's surface [and what's under it!] away from the indigenous population and putting it under the control of the "settlers."

The United States grew out of a settler state, so did Australia. Calling themselves "settlers" was already a part of their mythology. They pretended that they were settling an "unsettled" land. They pretended that there weren't already people living on that land that they intended to remove by force and murder. The Zionists promoted the myth of "A land without a people for a people without a land" and as soon as they got a mandate, they started removing Palestinians from the land.

Palestine was already a colonial land under British rule, and fighting against it, when large parts of it were given over to European Jews to form the settler state of Israel. Using one excuse or another, the amount of land under settler control as steadily increased since 1948 [the year I was born] because that's what settler states do. They tend to gobble up all the land to the water's edge and beyond - if you let them.

This brings us to Israel's latest offensive in Gaza and the thousands of Palestinians Israel is now killing there. It's an operation they refer to as "mowing the lawn." It is a procedure of the occupation and and continuation of the Zionist effort to rid Palestine of Palestinians. All the talk about tunnels and rockets is besides the point, however the Palestinians resist, Israel would complain.

Every time Israel massacres another school or UN center, President Obama repeats his mantra about Israel's "right to defend itself" and every time he says this he green-lights another massacre. As long as Israel is carrying on the occupation and as long as it is expanding settlements, both illegal under international law, its claim to a right to self-defense have as much standing as that of a bank robber's claim to a right to self-defense  while committing a bank robbery. 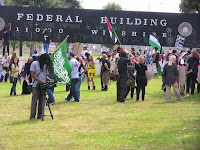 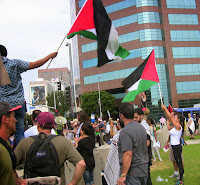 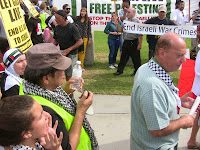 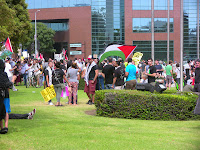 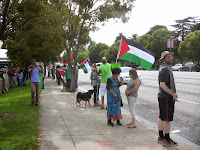 This is a letter to The New York Times on Saturday December 4, 1948 by Albert Einstein, Hannah Arendt, Sidney Hook, others on the occasion of a visit to the US by Menachen Begin. What what they said then still rings true today. The source is the original microfilm.

Among the most disturbing political phenomena of our times is the emergence in the newly created state of Israel of the "Freedom Party" (Tnuat Haherut), a political party closely akin in its organization, methods, political philosophy and social appeal to the Nazi and Fascist parties. It was formed out of the membership and following of the former Irgun Zvai Leumi, a terrorist, right-wing, chauvinist organization in Palestine.

The current visit of Menachem Begin, leader of this party, to the United States is obviously calculated to give the impression of American support for his party in the coming Israeli elections, and to cement political ties with conservative Zionist elements in the United States. Several Americans of national repute have lent their names to welcome his visit. It is inconceivable that those who oppose fascism throughout the world, if correctly informed as to Mr. Begin's political record and perspectives, could add their names and support to the movement he represents.

Before irreparable damage is done by way of financial contributions, public manifestations in Begin's behalf, and the creation in Palestine of the impression that a large segment of America supports Fascist elements in Israel, the American public must be informed as to the record and objectives of Mr. Begin and his movement.

The public avowals of Begin's party are no guide whatever to its actual character. Today they speak of freedom, democracy and anti-imperialism, whereas until recently they openly preached the doctrine of the Fascist state. It is in its actions that the terrorist party betrays its real character; from its past actions we can judge what it may be expected to do in the future.

A shocking example was their behavior in the Arab village of Deir Yassin. This village, off the main roads and surrounded by Jewish lands, had taken no part in the war, and had even fought off Arab bands who wanted to use the village as their base. On April 9 (THE NEW YORK TIMES), terrorist bands attacked this peaceful village, which was not a military objective in the fighting, killed most of its inhabitants (240 men, women, and children) and kept a few of them alive to parade as captives through the streets of Jerusalem. Most of the Jewish community was horrified at the deed, and the Jewish Agency sent a telegram of apology to King Abdullah of Trans-Jordan. But the terrorists, far from being ashamed of their act, were proud of this massacre, publicized it widely, and invited all the foreign correspondents present in the country to view the heaped corpses and the general havoc at Deir Yassin.

The Deir Yassin incident exemplifies the character and actions of the Freedom Party.

Within the Jewish community they have preached an admixture of ultranationalism, religious mysticism, and racial superiority. Like other Fascist parties they have been used to break strikes, and have themselves pressed for the destruction of free trade unions. In their stead they have proposed corporate unions on the Italian Fascist model.

During the last years of sporadic anti-British violence, the IZL and Stern groups inaugurated a reign of terror in the Palestine Jewish community. Teachers were beaten up for speaking against them, adults were shot for not letting their children join them. By gangster methods, beatings, window-smashing, and wide-spread robberies, the terrorists intimidated the population and exacted a heavy tribute.

The people of the Freedom Party have had no part in the constructive achievements in Palestine. They have reclaimed no land, built no settlements, and only detracted from the Jewish defense activity. Their much-publicized immigration endeavors were minute, and devoted mainly to bringing in Fascist compatriots.

The discrepancies between the bold claims now being made by Begin and his party, and their record of past performance in Palestine bear the imprint of no ordinary political party. This is the unmistakable stamp of a Fascist party for whom terrorism (against Jews, Arabs, and British alike), and misrepresentation are means, and a "Leader State" is the goal.

In the light of the foregoing considerations, it is imperative that the truth about Mr. Begin and his movement be made known in this country. It is all the more tragic that the top leadership of American Zionism has refused to campaign against Begin's efforts, or even to expose to its own constituents the dangers to Israel from support to Begin.

The undersigned therefore take this means of publicly presenting a few salient facts concerning Begin and his party; and of urging all concerned not to support this latest manifestation of fascism.

As you can see, all my life, the problem has been the same.