C.I.A. Said to Steer Arms away from Syrian Opposition

Tweet
The New York Times headline C.I.A. Said to Aid in Steering Arms to Syrian Opposition has been cited literally hundreds of times since it was first published on 21 June 2012 by non-interventionists and Assad supporters as through it was definitive proof that Obama supported the struggle to overthrow Bashar al-Assad in Syria and the CIA was the main supplier of weapons to the rebels. I pointed out at the time that what the article really said and what the CIA was really doing was attempting to keep all arms out of the hands of some opposition groups and some arms out of the hands of all opposition groups. The reality is that Obama has been throwing his weight behind Assad and his CIA is no friend of the Syrian Revolution. I said the NY Times article should have been more accurately titled C.I.A. Said to Aid in Steering Arms away from Syrian Opposition. I was banned from the Daily Kos, were I was blogging at the time, for sticking to this story. Since then, much has come out to backup this view, see my list of blog posts below. As if more proof were needed, the Wall St. Journal has just published this story which gives us an inside story story on how the CIA blocked weapons deliveries to Syrian opposition fighters:


Private Group Sought to Arm Syrian Rebels
A group led by a former Pentagon official devised a plan to supply moderate Syrian rebels with weapons sourced in Eastern Europe and financed by a wealthy Saudi, and it ran into flak from the CIA
18 May 2014
By Dion Nissenbaum
WASHINGTON—An urgent plea for arms by Syrian rebels last summer posed a quandary for the Obama administration.

The rebels were facing setback after setback on the battlefield. The administration backed their goal of unseating the Syrian government, but worried about U.S.-supplied arms making their way to fighters linked to al Qaeda. In the end, the U.S. approved a modest arms-supply effort that was slow to gain traction.

For one group of Americans, that wasn't enough. On their own, the Americans offered to provide 70,000 Russian-made assault rifles and 21 million rounds of ammunition to the Free Syrian Army, a major infusion they said could be a game changer. With a tentative nod from the rebels, the group set about arranging a weapons shipment from Eastern Europe, to be paid for by a Saudi prince.

The weapons never made it to Syria. As the private group worked to complete its deal, a surprise showdown in Jordan forced it to put its plan on hold.

The story of the aborted weapons-supply effort, confirmed by people directly involved, provides a peek inside the normally hidden world of private arms contracting. This one involves an unusual protagonist: a former high-ranking official at the U.S. Defense Department. And waiting in the wings was the founder of the controversial security firm Blackwater Worldwide.
...
Mr. Schmitz left the Pentagon job in 2005 to become general counsel at Blackwater's parent company, staying until 2008.

Last summer, as his team continued laying the groundwork to arm Syrian rebels, a Saudi member of the team was approached by a CIA representative in Jordan, who told him to put the brakes on the plan, according to two people involved in the effort.

Mr. Schmitz said he was "shocked and disappointed" that the U.S. government stepped in to quash the deal.

The CIA declined to comment. The National Security Council defended the administration's Syria policy. "The United States is committed to building the capacity of the moderate opposition, including through the provision of assistance to vetted members of the moderate armed opposition," said an NSC spokeswoman, Bernadette Meehan. "As we have consistently said, we are not going to detail every single type of our assistance."
More... 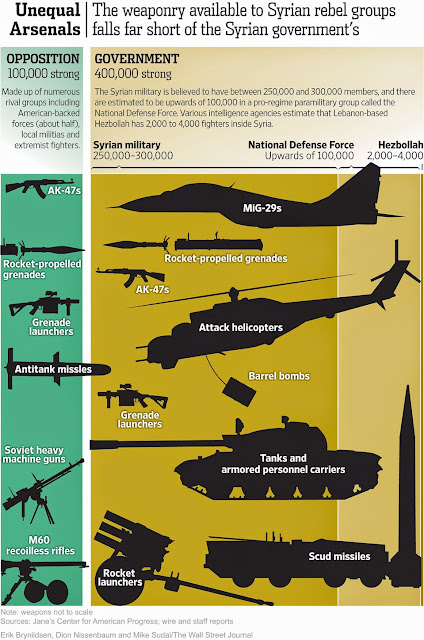 
Click here for a list of my other blogs on Syria
Posted by Linux Beach at 9:53 AM