Remembering 50 years after US Holocaust in Vietnam 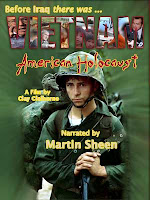 Although United States opposition to the Vietnamese struggle for independence goes back to its support of the French in the 1940's, as shown in the documentary film Vietnam: American Holocaust, it was only after the untimely death of President John F Kennedy that America's holocaust in Vietnam really began. The year was 1964. That year, with Lyndon Baines Johnson as the new Commander and Chief, General Westmoreland was made commander of the now rapidly growing US command in Vietnam, the Gulf of Tonkin attack was faked by Secretary of Defense Robert McNamara as a false pretext to pass a war resolution against Vietnam, the action figure G.I. Joe was born, and the US began its massive bombing campaign against Vietnam, a campaign that would eventually drop more bombs on that small country than were dropped by all parties to WWII. Before 1964, relatively few Vietnamese or Americans had been killed in the military conflict between the two countries. In 1964 it began a sharp escalation that would eventual deliver some 58,000 Americans and more than 3,000,000 Vietnamese to their graves.

It is now 50 years since those events and 2014 will see many 50th anniversaries of things related to the Vietnam War. Those of us who fought for peace during that war hoped that its conclusion would lead to an America that had "learned its lesson" about the morality and even usefulness of aggressive military power, but we have seen that those lessons were never learned. They waited for a generation to pass and American's aversion to wars against little countries that the warmongers derisively called "the Vietnam Syndrome" to ease, and then it was off to Afghanistan, Iraq and the Drone Wars. 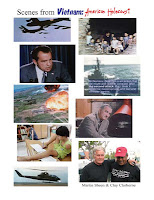 In a further effort to expand popular acceptance of their addiction to war, they already have a 13 year long plan in place that will cost tens of millions of dollars, The United States of America Vietnam War Commemoration. The bill creating it was signed by President Barack Obama. They plan to use the 50th anniversary of Vietnam War events to remake its image in the public mind as another one of America's "good wars."

We need to do everything we can to oppose this makeover and assure that the true picture of the Vietnam War, an inherently anti-war picture, is preserved and passed down to future generations. With that view in mind, I produced and directed Vietnam: American Holocaust in 2008, and I think it is now more important than ever. I offer it as a powerful tool to subvert this planned makeover. Therefore I am asking you to buy this DVD and show it around in the coming year. You should also consider giving a copy to a local library or school. That will help to assure that a true picture of the Vietnam War will be preserved.

It was a holocaust. Every American should see this film!
- Ron Kovic,Vietnam veteran & author Born on the 4th of July

I do a lot of public speaking on the subject of Vietnam. As I was watching the documentary, I kept thinking, ‘Wow, I can't wait to get this into the high schools.’ Clay has done an excellent job of piecing together the historical record. He uses footage, some of which I've never seen before, and it is so good. In my talks, I will say Eisenhower said this or McNamara said that. This documentary shows them actually saying it.
-Scott Camil, 1st Marines (1965-1967), Winter Soldier (1971)

Good job with the film. Very powerful. I think [Clay] did a good job of connecting Vietnam and Iraq without beating it into the ground. White phosphorous moment is particularly strong.
-David Zeiger, Director Sir! No Sir!

This is the best political video on Vietnam and its historic relevance to our times I have ever seen. You really got to it, from the Garvey connection in Harlem of Ho Chi Min to our support of the French and the British release of the Japanese in Vietnam. It cuts deep enough to enrage me.
-Stuart M. Chandler, Rotten Tomatoes

The best documentary ever made on the Vietnam War.
- Blase Bonpane, Director of the Office of the Americas

Thank you so very much. Thank you.
- Vy Xuan Hong, Member, NA, Vietnam

Buy the DVD from the Vietnam: American Holocaust website or Amazon.com

Also visit the Veterans for Peace Full Disclosure: Towards an Honest Commeration of the American War in Vietnam website and sign the Open letter to the American people.