The shot that killed Kennedy escalated the Vietnam War

"Since November 22, 1963, a curse has fallen upon this country. . . . Since this tragic date, the mainland breaks have gradually worsened, and the ground swell has been relegated to the ranks of the unlikely. Cities burn, schools are sieged and overseas commitments increase. It's only a matter of time before this upheaval shall reach endeavors such as surfing."
-- Miki Dora, legendary Malibu surfer ~ 1965

President John F Kennedy was assassinated 50 years ago today. Since that date there has been a lot of speculation about who killed him and why, and there has been a lot of doubt with regards to the official version of events. I don't have any answers but I still have many questions and one of the first ones I ask in all such circumstances is "cui bono?" Who benefits?

Beyond all the conspiracy theories, this is what we do know: On 15 November 1963, one week before Kennedy was assassinated, following an October prediction by his Secretary of Defence Robert McNamara that all US troops would be gone from Vietnam by the end of 1965, General Harkins announced that the first one thousand of the then fifteen thousand five hundred US 'advisors' would come home by Christmas.

As we know, this is not how things worked out.

Lyndon B Johnson replaced John F Kennedy as president on 22 November 1963 and just four days later, on 26 November 1963, he issued National Security Action Memorandum No. 273 which outlined a policy of escalation in Vietnam that would see more than half a million US troops in Vietnam before the Johnson presidency was over.

Millions died in the Vietnam War, including more than 58 thousand Americans, but $$$ Billions were made by the Military-Industrial Complex.

These are the facts. Was there a connection? Who can say? But like I always say: Cui Bono!

Martin Sheen isn't just a great actor. He is also a true student of history and was a strong supporter of President Kennedy, a role he tried to emulated in his long running TV show Westwing. When I produced and directed Vietnam: American Holocaust in 2008, Martin Sheen did more than just narrate. He also wrote a piece about this connection between the Kennedy assassination and the Vietnam War, which I included as one of five special added features on the DVD.

In commemoration of the 50th anniversary of the assassination of President John F Kennedy, I have released this feature to the Linux Beach You Tube channel so that it will be more generally available for free:

On the day after President Obama has secured an agreement that will extend the war in Afghanistan past 2014 and US imperialism threatens other new wars all across the globe, the true history of the Vietnam War and its era become even more important. This is more so in light of Obama's plans to give the history of the Vietnam War a 13 year, multimillion dollar makeover in the hopes that future generations can be convinced that it was a good war. 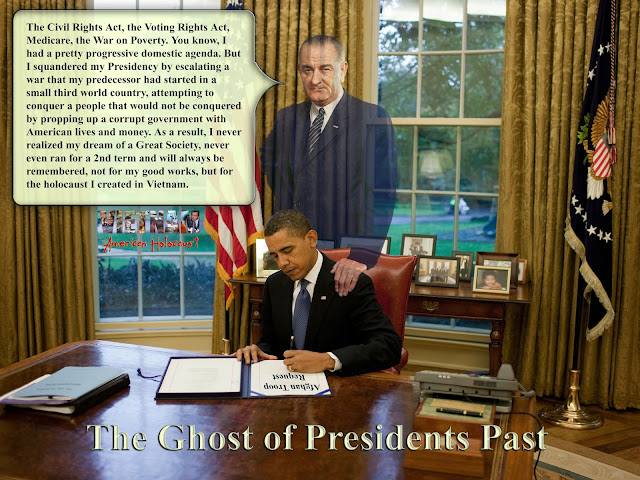 There is much more in the DVD, including the hardest-hitting, most brutally honest documentary that anyone has ever made on the Vietnam War, which is precisely why Martin Sheen agreed to narrate it. 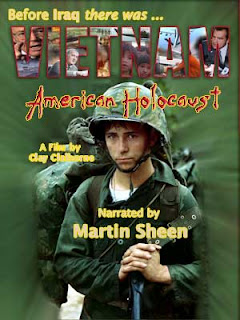 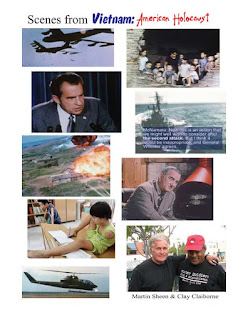 Now it is more vital than ever. Purchase your copy today from Linux Beach or Amazon. Show it to your friends. Put it in your libraries and schools. A battle is brewing over our collective memory of this great tragedy and it is a battle that we can't allow the war mongers to win!
Posted by Linux Beach at 12:00 AM