Renfrey Clarke on the Libyan militias

Tweet
There has been a lot going on in Libya and I simply haven't had the time to write about it. Louis Proyect brought this piece to my attention and Renfrey Clarke has done an excellence job of framing the role and possibilities the Libyan militias in the overall context of the class struggle within the Libyan Revolution. This piece was taken from the conversation on Green Left @ Yahoo Groups :


There's no way shooting unarmed demonstrators can be anything but a reactionary act, and it's very clear that once this happened in Tripoli weeks ago, the masses of the local population lost what tolerance they'd had for the out-of-town militias under whom the threat to life and limb in the city was spiralling up toward Washington DC levels. As Chris indicates, the fact that the Misrata and Zintan militias have been withdrawn represents a victory for the popular will.

Now the people of Tripoli will get to see if the government's new police force, which has taken over the primary security role in the city, can do it any better.

Someday there'll be lengthy PhD theses written on the history and politics of the Libyan militia movement, whose complexities are indeed mind-bending. But if we keep in mind our Marxist conceptions of class and state, it's possible to grasp the overall thrust of what's occurring.

A warning, though: to make any sense of what's going on, we need to erase from our minds the reporting in the Western mainstream media, even in more liberal organs such as the Guardian. This reporting is not only superficial, but also highly ideological. The message it sets out to impart is that if you don't have a capable, no-nonsense bourgeois state with a tough army and police, you have mob rule, crime, chaos, mayhem...

I recommend the English-language Libya Herald, which Chris cites. Still bourgeois journalism, of course, but informative and quite professional. It's produced for diplomats and business types who can't use bullshit.

Just to provide a sense of the misreporting, some things you wouldn't have guessed. What were the out-of-town militias doing in Tripoli? Well, they'd been sent there in August by the government, in the persons of the President of the Congress, the Minister of Defence, and the new army Chief of Staff. This step was taken after the government acknowledged that its attempts to set up a new army and police force were proceeding unsatisfactorily, and that the soldiers and police who'd been trained to that point weren't up to scratch.

Now: a disagreement with Chris. The power of the militias isn't arbitrary, in the sense that they operate as they choose. On their home turf, where they're normally located, they're an expression of local power relations, not mini-regimes in themselves. While the militias have their own social base, for the most part they can be said to answer to local civic and tribal leaders, who wield a much more real authority in Libya than any instructions coming from the nominal government.

At the same time, the militias are popular organisations in the sense that (again, when on their home turf) they're embedded in the local masses and reflect popular interests, hopes and prejudices. The fact that the prime political influence on them is generally local elites is an obvious contradiction. 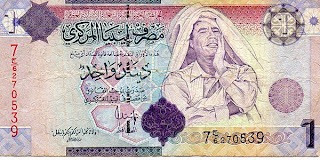 How do the militias take to this idea? They mostly profess to like it (there's the promise of permanent jobs and wages, after all). Back in August a spokesperson for the Supreme Revolutionaries Council, one of various networks linking militia groups, told the Libya Herald: "We agreed that the army should be the first priority now and that the brigades would dissolve as soon as the new Chief of Staff takes concrete steps towards forming a strong national army."

Note the implied reservation. What the militias, broadly speaking, consider to be a legitimate national army (or state, for that matter) is one in which no former ranking member of Gaddafi's army or bureaucracy comes within a whiff of power. That undoubtedly reflects a deep-rooted sentiment in the popular layers from which the militia members stem, and implies major disagreements with the current government at some point down the track.

Libya's government is dominated by the National Forces Alliance (NFA). This is the party of Prime Minister Ali Zeidan, and in the 2012 congressional elections it gained 48% of the popular vote. Its key leader is former interim PM Mahmoud Jibril, a US-educated economist. Jibril was for a time Gaddafi's head of planning, but broke with the regime in the first days of the 2011 revolt.

A German foreign policy think-tank describes the NFA's congressional deputies as coming from "an economically privileged class and prominent families," going on to depict the party variously as "a rallying-point for parts of the establishment" and as "an unideological electoral coalition of those parts of the elites that remained in Libya during the Gaddafi era, and for this reason had to find some kind of accommodation with the regime."

While the NFA mouths promises of social welfare and a minimum wage, its economic practice is neo-liberal. One expression of this is the government's push to start privatising the country's large public sector. Initial plans include selling off one of North Africa's largest steel plants, located in Misrata.

Zeidan and his government are broadly despised, and reportedly are tolerated in office only because the strongest opposition bloc, the Moslem Brotherhood, is even more widely disliked. In what remains a lively and open political scene, popular antipathy to Zeidan and his ministers is certainly going to coalesce and find organisational forms.

In the immediate term, and at least until privatisation comes onto the immediate agenda, this political opposition is unlikely to centre on class-based demands. Outside the oil industry, Libya has few sizeable enterprises. Labour organising was impossible under Gaddafi, and the trade union movement remains numerically small.

An important focus of class-struggle consciousness exists, however, in the oil industry workforce. The oil workers have an effective trade union and over the past year or so, a history of vigorous strike activity.

Significantly, there hasn't been notable antagonism between the oil industry militants and the militias. In fact, the militias entrusted by the government with guarding the oil installations have regularly made common cause with the oil workers.

The government is now under pressure from the IMF to press ahead with its plans for privatisation. If this occurs, drastic job cuts are predicted to follow - in a country where unofficial estimates of unemployment already range as high as 30 per cent. Such a development could see class-struggle ideas spread rapidly, including among Libya's huge cohort of jobless youth.

It's difficult to imagine that large numbers of militia members - with plenty of historical reasons to detest the Zeidan government and the social layers on which it rests - wouldn't move in behind a substantial class-based radicalisation.

For the present, though, no such radicalisation is under way, and popular political thinking in Libya remains primitive and contradictory. While a sense of economic injustice is clearly pervasive, large numbers of Libyans view the causes of this injustice in regional (and in some cases, ethnic) terms. The prominent themes of current political struggles include the (not unjustified) demand for a fairer split-up of oil revenues and for a greater devolution of formal authority from Tripoli to the Libyan regions. 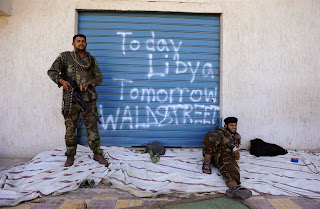 In the near term, we can expect that this situation will tend to keep militia members aligned with local bourgeois elites rather than with workers and the unemployed. But we're talking tendencies and alignments here, not firm authority. The militia members have minds of their own, and at the crunch, their popular-plebeian allegiances are quite likely to prevail over vague attachments to local bourgeois patrons.

In necessarily condensed and schematic form, this is the social configuration that sits on top of a lake of sweet light crude, which the imperialists would love to control and exploit without encumbrance. No wonder the Western mainstream press is campaigning for the implanting of a conventional bourgeois state, with a monopoly on the power of coercion.

Are we in the international left under any obligation, ideological or moral, to help the imperialists get their wish? It would seem axiomatic that we have no principled brief to support the creation of strong, coherent bourgeois states. But let's go back a little and consider some basics.

In circumstances where workers are compelled to endure bourgeois rule, we demand that this rule be bourgeois-democratic. That implies a demand that the bourgeois government use the power of its state, which the workers aren't yet in a position to overthrow, to defend the ability of the proletariat to organise and to carry on trade union and political activity.

That's not, of course, why the National Forces Alliances government is trying to build a conventional military. The key tasks for which the government's army is being prepared are those of enforcing privatisation, to the benefit of imperialism and the dignitaries of the NFA, and of crushing popular opposition to this process.

If the Libyan militias were simply marauders with a taste for shooting demonstrators, then for workers to agree that the bourgeoisie should build its army and use it to dismantle the militias would make a certain amount of sense. But the militias arose out of an overwhelmingly popular mass uprising (I can demonstrate this, if anyone's interested) and in their great majority are not homicidal. Nor, on the whole, do they deserve to be characterised as reactionary. As noted,
sections of the militia movement have already supported oil industry strikers, openly defying the government in the process. How the militia organisations will respond to the projected pillage of the Libyan public sector is at least an open question.

Workers who engage in struggle need to be careful who they look to for support. But the Libyan militias have the weapons and organisation to block the government's privatisation plans. As members of the popular classes, the individual militia members share with workers an interest in stopping the plunder going ahead. Consequently, it may be completely appropriate for workers to campaign to draw militia organisations into the struggle to defend public ownership of the enterprises involved, and to preserve the jobs that are under threat.

A political campaign along these lines could have the effect of breaking militia organisations from their alignments with local elites, and substituting an affinity for politically active sections of the proletariat. It would perpetuate the situation, essentially advantageous for the working class, in which the Libyan bourgeois state remains weak and ill-equipped to discipline worker activists.

None of this is to say that crimes by specific militias or their members should be ignored. In my view the members of the Misrata militias who shot demonstrators in Tripoli, and who harassed and murdered displaced Tawerghans in their camps on the city's outskirts, should face criminal charges.

But an alliance between workers in struggle and militia bodies points toward a longer-term situation in which the armed plebeian masses in Libya would come increasingly to take their ideology and political lead from class-conscious sections of the proletariat. That would be a militia movement that shunned attacks on the population, instead using its weapons to enforce the popular interest. The Libyan revolution, phase II.

Such are my hopes. But even in present circumstances, the international left needs to abandon its dominant discourse on Libya, which apart from mangling history, in large measure recycles the poison in the bourgeois media - with the occasional minus substituted for a plus. In place of the rants, we need painstaking political sociology, informed at a basic level by class analysis. 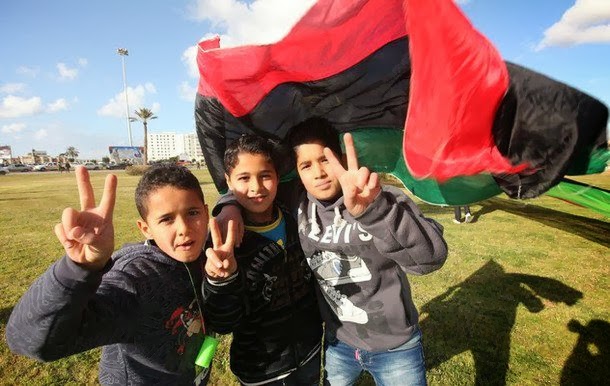 Click here for a list of my other blogs on Libya
Posted by Linux Beach at 8:23 AM