Tweet
A Scud missile blew up a bakery in ar-Raqqa on Wednesday. The Death toll now stands at 40 but with another 200 injured, the number killed is almost certain to rise. All told, three Scud have hit ar-Raqqa on Thanksgiving or the day before.

I feel compelled to pen this blog because nobody in the mainstream media is reporting this story and that includes Amy Goodman and Democracy Now. I also believe this massacre news blackout involves most, if not all of the "Left" and "anti-war" press. I feel compelled to report this story because nobody else is doing it and I don't think this war crime should be hidden from public view.

Unlike the poison gas attacks and other Syrian slaughters in which perpetrator has been in question, there can be no doubt who is responsible for these massacres because only the Assad regime has the big Scud missiles. Scuds are unguided missiles and they are very inaccurate. That is not important to Assad because he is targeting civilians and he is not too particular which civilians he slaughters, however using such weapons against a residential area is a war crime. Unfortunately we apparently live in a world were war crimes may be catalogued but they won't be stopped and they won't be punished, so the suffering of the Syrian people in a depraved world continues.


Thanksgiving message from people in Syria to people in the US


Since ar-Raqqa was liberated from the Assad regime's grasp last March, bombardment by the regime hasn't been its only problem. It was been re-invaded by Islamic jhadists, possibly some of the same ones Assad let out of jail, and while the Assad regime has been terrorizing them from above, these jhadists have been terrorizing people on the ground by attempt to impose their version of shari law and their vision of an Islamic Syria.

Since the Assad regime likes to present its opposition as consisting entirely of Islamic terrorists, one might assume that the bombardment was aimed that these elements, but that has not been the case. 26 November 2013 the BBC interviewed at activist named Mohammed about Raqqa who thinks the main jhadist group in ar-Raqqa, Islamic State of Iraq and the Levant (ISIS), is in collusion with the Assad regime:


[Mohammed] claims they are working with the government to undermine the rebellion.

"[In Raqqa], they have occupied the governor's house and other former Baath Party buildings. But when the city comes under bombardment, only schools, hospitals and residential areas are hit, and not any ISIS-occupied locations," he says.

While Bashar al-Assad wants the world to think that he is locked in a war to protect a secular Syria from foreign jhadist terrorists, his real relationship with these Islamic terrorists is something else entirely. Doing the US occupation of Iraq, Assad encouraged these groups, particularly the Mahmud Gui Agasi wing of al Qaeda, and Assad ran the rat-line for them to Iraq.

These groups never face repression from either Assad or the Baathists until the US pulled out of Iraq. Then they are all thrown in jail because the Assad regime considered them a threat to the state. But once the democracy protested started up, Assad proclaimed an amnesty and all of these jhadist-terrorists were release in March 2011.

The reason for their release or the conditions of their release has never been clear. What is known is that since they have been released, they have played a counter-revolutionary role in the Syrian conflict and in that way at least, have indirectly supported the Assad regime. It has also been observed that while Assad likes to rail against the jhadists, he has not had a strong record of attacking them. Instead he seems to hold his fire for the democratic opposition and the Free Syria Army.

The International Middle East Peace Research Center said in a report on the jihadist front in Syria:


the bonds between the former Syrian jihadists and Baath’s intelligence units are still very suspicious. Especially, it is alleged that the head of National Security Bureau Ali Memluk has still contact with the organization [Nusra]. The reason of the ongoing contacts is considered as the Baath’s purpose to transform the opposition in Syria into al-Qaeda dominated movement.

The main debates revolve around how and by which power’s support Colani group[Nusra] has been armed. There are various claims on how and from where these weapons have been transferred. Since some of them assert that the weapons are from abroad, some state these groups are armed by Assad’s regime.

But I digress, this blog post is about the slaughter Assad is doing directly in ar-Raqqa.

Below is some of the material I found on-line documenting these attacks, Why is the Media and most of the "Left" giving Bashar al-Assad's slaughter a pass? Why does the world allow it to continue? What are you doing about it? 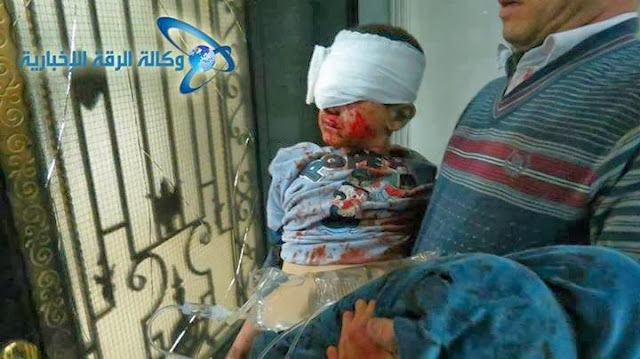 
From The Syrian Observer we have this report about the attempts to live life normally in Raqqa in spite of the regime attacks:

Back to School in Raqqa
Tue 26 Nov 2013
By Damascus Bureau (a civil society website)
Education came to a halt in the city when opposition forces took over some of the schools as military bases, while others became shelter for thousands of refugees

Thirteen-year-old Mahmoud was excited to return to his eighth grade classes in September in the north eastern Syrian city of Raqqa, after more than six months of closure.

“I was so happy to go back to my desk. I missed my classmates and I missed studying,” he said.

Mahmoud resumed classes at the “Mutafawiqun” School, a public school specialized in serving gifted youngsters. The school had been closed since the armed opposition seized control of the city on March 14 of this year.

Despite the fact that the Ibn Tufail vocational school in Raqqa was bombed by government warplanes on the morning of Sunday, September 29, 2013, Mahmoud went back to scheduled classes like many other students in the city.

Ibn Tufail students were massed in the front courtyard of the school, getting ready to enter, when two regime-launched missiles landed, killing 14 students.

Some students have stopped going to school, and many parents share the sentiment of one mother, who said she is waiting for “the situation to calm down.” She has kept her children home since the bombing of the Ibn Tufail school. More...

This video documents Assad's attack on that school:

The bombs hit the Ibn Tufail Commercial Secondary School at around 8:05 a.m. on September 29. HRW has testimony from a Raqqa resident who said that he went to the school immediately after the attack, and saw 14 bodies, including some without limbs. HRW also spoke to a doctor from National Hospital in Raqq, who said he counted 12 bodies, mostly students, and the hospital treated 25 wounded.

HRW say that the regime attack against the school was likely a deliberate targeting of a civilian area.

Reuters reported on the Assad regime attack on the school on the day it happened:

BEIRUT Sun Sep 29, 2013 1:48pm EDT
Reporting by Alexander Dziadosz; Editing by Andrew Heavens
At least 16 people, most of them students, were killed in an air strike that hit a secondary school in the rebel-held Syrian city of Raqqa on Sunday, activists said.

Fighting continued across the country including in the outskirts of the capital, underlining the relentless nature of the civil war in the face of international efforts to destroy Syria's chemical arms and revive peace talks.

Raqqa in northeastern Syria has been under the control of insurgents fighting to oust President Bashar al-Assad since March but the city has been regularly bombed by government forces.

Videos posted online by activists showed the bloody and charred remains of bodies said to have been from the air strike in Raqqa. Some of the victims appeared to be young men, possibly in their teens.

The British-based Syrian Observatory for Human Rights, a monitoring group with a network of sources across the country, said the death toll was at least 16 - 10 of them students at the school - but that the number was likely to rise because some people were critically wounded. More...

And so it goes for the people of Syria. It is the worst humanitarian crisis in more than a generation. It is entirely man-made, and nobody in the so-called civilized world is doing anything to stop it.


Click here for a list of my other blogs on Syria
Posted by Linux Beach at 8:07 PM