Tweet
On the second anniversary of the uprising to overthrow Bashar al-Assad, Amy Goodman finally did a Democracy Now segment on the struggle in Syria.

First it should be noted that Amy, co-host Juan Gonzalez and their two guests were very careful not to say anything negative about Bashar al-Assad, Iran or Russia. There was, however, a lot of focus on Saudi Arabia "allowing the supply of arms and even the infiltration of militants" to Syria.

Her guests where Reese Erlich and Rim Turkmani. Reese Erlich was introduced as a "freelance foreign correspondent" and talked mostly about Saudi Arabia and Bahrain. First came Rim Turkmani, who spoke as a member of the Syrian non-violent opposition and was introduced as "an astrophysicist and member of the Syrian Civil Democratic Alliance who’s in New York meeting with Security Council members discussing possible political solutions to the situation in Syria."

So who is Rim Turkmani, when she is not representing the Syrian opposition on Democracy Now? 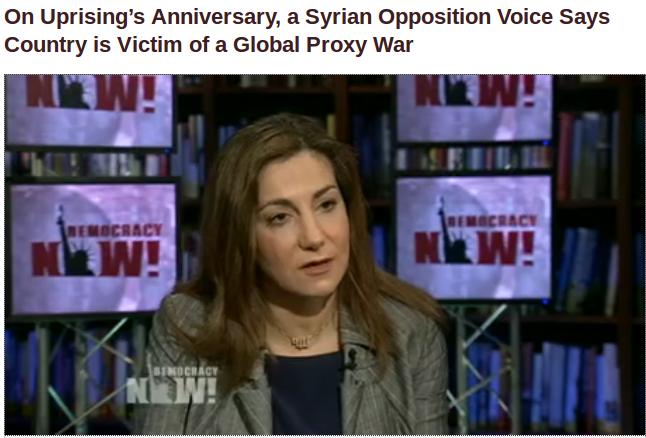 "There have been external actors who were supporting the arming of the opposition, and unfortunately that fueled the violence, increased dramatically the number of casualties, and turned the whole thing into more than a war, rather than a revolution."

Over a year ago Lucy Lips, writing at Hurry Up Harry, named her one of the:

Syrian Regime Apologists Posing as Oppositionists
February 29th 2012, 10:46 am
Dr Rim Turkmani is a British-Syrian astrophysicist at Imperial College London and a sometime commentator on Syrian affairs. Up until recently, she was a director of the British Syrian Society, which claims to work:

“consistently and very effectively to foster relations at all levels between Britain and Syria through a wide range of social, cultural, business and other public events both in the UK and Syria which include lectures, conferences, seminars and exhibitions.”

The founding co-chairman of the Society is Dr Fawaz Akhras, a London-based cardiologist, who also happens to be Asma al-Assad’s father. As The Guardian described him about a year ago:

“Informally, Akhras plays a role as gatekeeper for Assad, vetting British journalists who wish to interview the president. He is close to the Syrian ambassador to Britain, the economist Sami Khiyami, who serves with him on the advisory board of the Centre for Syrian Studies at St Andrews University.”
...
A journalist who met him at a dinner discussion about Iraq recalled: “Akhras pulled out some written notes and began by saying he was only a humble doctor and not an expert on Middle East politics, and here was his personal opinion … what followed was a pure Ba’athist line straight from Damascus.”

According to Assad regime emails that were hacked by cyberactivist Anonymous, Akhras also believes that Mossad was responsible for 9/11.

Turkmani is something of a package deal. She is very active in Arab charity groups in the UK alongside her husband Chris Doyle. Doyle is the executive director of the Council for Arab-British Understanding (CAABU).

Together, Turkmani and Doyle serve as trustess of the Damask Rose Trust, which claims, according to the UK Charity Commission, to “support welfare and development projects in Syria and [to promote] appreciation of Syria’s cultural heritage among British audiences.” Yet Damask Rose has received its “core cost donation” from Gulfsands Petroleum, a UK oil company that was recently forced to clarify and then suspend its relationship with various business holdings of Rami Makhlouf, Bashar al-Assad’s billionaire industrialist cousin who has been sanctioned by the United States and European Union for being complicit in the regime’s violence. Makhlouf owns or owned a 5.75 per cent minority stake in Gulfsands. More...

This is the type of person that Amy Goodman found to present the Syrian opposition on the second anniversary of the beginning of the Syrian Revolution.

I just wanted you to be aware.


@rim_turkmani says to @bbcnewsnight there has be a contact group but involve all Syrians, including all opposition groups #syria

I will be on Newsnight, BBC2 at 10:30 tonight commenting on the news from Syria. #Syria

@rhijazi The exhibition is now open, call the RS and book a tour or come at any time between the 5-10 of July

Click here for a list of my other blogs on Syria
Posted by Linux Beach at 1:55 AM