BREAKING: EU to Syrian opposition: No Arms for You!

Tweet
Today is the second anniversary of March 15th, the mass protests that heralded the beginning for the popular uprising of the Syrian people against the 42 year Assad regime autocracy. On this day two years ago, the people of Syria boldly announced the arrive of the Arab uprising to this country by holding peaceful mass demonstrations across the country under the banner "Day of Rage."

Syrian President Bashar al-Assad immediately showed his people that they had no right to peacefully petition their government. He had the non-violent protesters shot dead. The number have grown alarmingly since then as the opposition took up arms in self-defense and favor

So, as the struggle to topple the Assad regime enters its third year, please remember the toll it has exacted so far: 75,000 murdered, 82,000 missing, 252,000 prisoners, more than one million refugees from Syria and three million forced from their homes. Also please remember that these are not just numbers, these are human beings. These numbers can be expected to more than triple in the next year if the Assad regime is allowed to continue its current rate of attrition

Also, please recognize the fact that this slaughter is happening because the world powers are enabling it. Bashar Assad may be a mad dog killer but his weapons come from outside of Syria as do a growing number of those who are killing for him.

There are a thousand reasons for the failure of the world powers to provide a no-fly zone and put an end to Assad's campaign of "Death from Above" and they all outrank a desire to save the children.

There are a million reasons for not giving the defender of those children weapons to shoot down Assad's air force, but a desire to see an end to the carnage isn't one of them.

Neither Putin, Obama, Cameron nor Holland have wanted to see the Assad regime go because it was bad for the Syrian people. The truth is that none of the world powers really wants to see a government overturned by a popular revolt

Today, on the second anniversary of this revolt that has turned so bloody, the European Union has refused to lift the arms embargo to Assad's opposition, with Germany's Merkel repeating the off heard mantra that arms to the people being attacked would risk "further fueling conflict."

While British PM Cameron and French President Hollande hinted that they may go it alone and provide military assistance to the opposition anyway. British FM Hague has been singing a different tune, according to him, those fighting Assad shouldn't expect any military assistance from Britain any time soon:

U.K. Foreign Secretary William Hague told reporters in London today that while Britain’s policy was largely similar to France’s, it has no plans to send lethal weapons to the rebels. “We are on the same page in many ways,” Hague said. “We have no plans at the moment to do anything different to what I announced in Parliament last week.” That included the provision of armored vehicles and body armor.

It remains to be seen if the French will deliver more than words but in my opinion, the Syrian people will have to win this fight by their own efforts and with whatever support comes to them from the world's people on a people to people basis because the governments of the world want the current government of Syria to prevail.

Among the most prominent of reasons for allowing this state of affairs is the myth that the Syrian civil war is, at its heart, sectarian conflict that is as old as the sects and we just have to let it play itself out. The Atlantic has just published a powerful rejoinder to such talk:

Stop Trying to Make Syria's War Into a Sectarian Conflict
Mar 15 2013, 11:34 AM ET
...
To be sure, a compelling story is making the rounds. Such voices as Patrick Cockburn at The Independent , Joseph Olmert in The Huffington Post, and countless others describe the Syrian war as an armed conflict pitting Sunnis, who make up the majority of Syria's population, against the Alawites, who back the Assad regime, and their Shiite allies, Iran and Hezbollah. In this telling, Christians and other innocent minorities are under siege, caught in the crossfire and afraid they will be oppressed by a Sunni majority in a post-Assad Syria. This would make Syria just the latest in a long string of Middle Eastern countries riven by intractable sectarian differences that lead to interminable chaos and violence. Because religious divisions define people's identities in this region, the story goes, history tells us that there is no choice but to let them "fight it out" while we do everything in our power, including possibly arming the opposition, to ensure that those who support U.S. interests in the region prevail.

This all-too-familiar story appeals to a range of interests inside and outside Syria. It paints a picture of a Middle Eastern conflict in which religious and sectarian differences inexorably determine political outcomes. Because it suggests that such violence is inevitable and may even be biologically or culturally predetermined, it exonerates the Assad regime and other countries that have failed to act even in the face of extreme state-sponsored violence against innocent civilians -- as when Syrian government forces bound and shot 49 children during a massacre of 108 civilians in Houla last spring.

The sectarian story is also wrong for a less obvious reason. Syrians -- the real people on the ground who happen to live in Syria -- don't conform to the sectarian stereotypes that policymakers and pundits are promoting with such gusto. Of course, some Syrians identify strongly with their ethnic or religious communities. But like people all over the world -- including here in the United States -- many Syrians hold multiple allegiances, sympathizing with more than one sectarian identity or none at all, or are of mixed backgrounds. Such individuals do not fit neatly into the boxes of religious identification demanded by the narrative of sectarianism. More...

What's wrong with this picture? 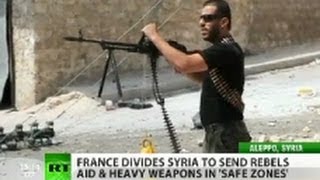 Published on Sep 6, 2012
France is considering supplying heavy artillery to the Syrian rebels to help them fight President Assad's forces. That's according to diplomatic sources, who say Paris is also stepping up support for the Syrian opposition to help them forge a government-in-waiting.


Click here for a list of my other blogs on Syria
Posted by Linux Beach at 10:16 AM