364 martyr in #Syria thus far; 220 of them in Deir Balbaa neighborhood of #Homs. - LCC. This bloody day is not over yet

Activists are reporting that the Assad regime is currently carrying out a new massacre in Homs. The current death toll in Homs is said to be 220 and counting as Al Arabiya reports:

At least 150 charred corpses were found Saturday in Deir Baalba in Homs, the Shaam Network reported as violence flared in other parts of Syria.

Earlie,r Syrian regime forces killed 20 people in a town near Aleppo, raising the nationwide death toll to more than 100, according to activist media.

Sana Revolution reported the “massacre” took place in Khamsya town near Aleppo. The Coordination Committees reported that more than 100 were killed in the country.

The fighting in Aleppo forced Syria’s national airline to cancel a flight into the city.
More...

According to #LCC, 364 martyrs in #Syria, including 220 who were summarily executed in the Deir B'albeh neighborhood of #Homs.

We will always remember how the “moral” world imposed an arms embargo on us while allowing Assad to use all weapons against us. #Syria”

Massacre in Deir Balbeh ranging between 150 and 177, their media office said 177. Horrific, all executed. #Homs #Syria

#Homs Is The Capital of Revolution. Al Assad's forces occupied the district of Dier Balbaah and Baba Amr neighborhood before (1) 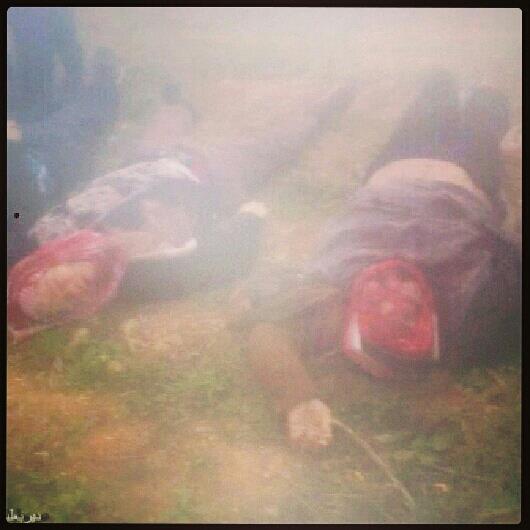 France24 is now carrying this report:

AFP - Forces loyal to Syria's President Bashar al-Assad on Saturday seized a district of the central city of Homs after a fierce assault that sparked a humanitarian crisis, a watchdog said.


"The army launched an offensive several days ago on the neighbourhood of Deir Baalbeh with heavy bombing, and the fighting and attacks continued until the rebels withdrew," said the Syrian Observatory for Human Rights.

The Britain-based watchdog, which relies on a large network of activists and medics on the ground, said that several other rebel districts, long under siege by the army, were still holding the troops at bay.

It said that the fighting had triggered a humanitarian crisis in the city, referred to by anti-regime activists as "the capital of the revolution."

Homs, a longtime industrial heartland, was the target of a major army offensive in February that left 700 people killed, the majority civilians. More...

Our defeat in #Homs today is a further indication that if we do not UNITE we will have to deal with horrible massacres.#FSA #Syria

her name is NADA ALHRAKI...she is nine months old.

the angel... her soul crossed the border to join our 397 martyrs.

EAWorldView had this report on Homs:

2137 GMT: Syria. Activists are claiming, supported by video of bodies, that five children and two women were among 10 people killed by shelling of the Damascus suburb of Douma today.


1829 GMT: Syria. The Local Coordination Committees is now including 220 people "field-executed" in the Deir Baalba section of Homs (see 1749 GMT) in its claim of 364 victims today.

The Committees write more than 20 children and 20 women are among today's deaths.

1749 GMT: Syria. The Local Coordination Committees report that 146 people have been killed today, including 45 in Damascus and its suburbs, 38 in Aleppo Province, and 20 in Deir Ez Zor Province.

The total could soar, however. The LCC claim 220 people were slain in the Deir Baalba section of Homs as regime forces moved into the area. The organisation asserts that victims were allowed to pass through the "Petrochemistry checkpoint", but were then arrested near the university and field-executed.

1641 GMT: Syria. Reuters, citing activists, reports that regime forces have made advances in Homs, moving into Deir Baalba on the northeastern edge.

Insurgents now hold only central areas around the old city and the district of Khalidiyah, immediately to the north.

Click here for a list of my other diaries on Syria
Posted by Linux Beach at 12:00 PM